SYDNEY, Wednesday 9 February – The January 2022 CreditorWatch Business Risk Index (BRI) has revealed that the Australian economy has some way to go before it shakes off the impacts of the COVID-19 pandemic.

Among the dire results were court actions jumping a massive 58 per cent over the last quarter compared to the corresponding period last year, which is a return to pre-COVID levels and a strong indication that large creditors such as the banks and ATO have resumed regular collection activities. This figure alone signals that business insolvencies will steadily increase across 2022.

The national probability of default remains flat at 5.7 per cent, against 5.8 per cent in December.

Lockdowns in 2020 and 2021, particularly in Victoria and New South Wales, already had many businesses on their knees and it seems the spread of Omicron was the coup de grace for a number of those.

Furthermore, CreditorWatch’s data showed that trade receivables continue to decline dramatically, down 45 per cent last quarter compared to the corresponding period last year and around 50 per cent lower than pre-COVID levels. As expected, January trade activity was weak following a dismal Christmas trading result. This sustained decline in cashflow will be a key driver of insolvency risk across the economy throughout 2022.

External administrations for the quarter were up seven per cent on the same quarter last year.

The January Business Risk Index release also includes a state-by-state analysis on defaults, with the best and worst performing local government areas. Western Australia was the best performer with Victoria and New South Wales struggling to recover from their protracted periods of lockdown last year.

“The continuing slide in the value of trade receivables is a worrying trend,” says CreditorWatch CEO Patrick Coghlan. “The RBA’s view last week was that Omicron hadn’t derailed the economic recovery and when case numbers go down, the floodgates will open and consumers will rush out and start spending this $200 billion hoard of cash.

“I’d love that to happen so businesses can get back on their feet more quickly, but there are a lot of ‘ifs’ about that assumption. Pressure is mounting for interest rates to rise. If that happens, it will be another hit to small businesses. CreditorWatch is expecting business insolvencies to grow steadily this year, even if the RBA doesn’t hike interest rates.”

WA leads the way thanks to mining and agriculture regions

The national probability of default (PD) for January 2022 was 5.7 per cent, compared to 5.8 per cent at the end of last year. While recognising this metric moves within a narrow range, the January result is the highest in more than three years. Victoria appears to be the most at risk state with a PD of 5.9 per cent compared to 5.8 per cent only four months prior. This update is consistent with other indicators suggesting that Victoria’s economic recovery will be slower to gather momentum than other states because of the duration and number of lockdowns endured.

The number of defaults fell by 12 per cent at the start of this year compared to January 2021. Over the three months to January 2022 defaults increased 2.1 per cent to be up by 15 per cent when compared to the equivalent period a year ago. We appear to be on the cusp of a sustained increase in defaults as economic conditions slowly stabilise over the first half of the year.

That said, there has been talk of Omicron-related support packages from the NSW and South Australian governments. Welcome for sure, but they may provide examples of how we are kicking the can down the road for a while yet.

Probability of default by region

The five regions at least risk of default over the next 12 months are:

The January Business Risk Index results provides an insight into the dynamics of the Omicron variant of COVID-19. The regions at least risk of default are out of the capital city radars, which continues to be a key factor. Still, the list is a reminder that things don’t last forever. The rural New South Wales region of Moree – Narrabri consistently fell into the top five of least at-risk areas for PD. Then Omicron hit the region and suddenly, it’s not on the list. That’s a reminder that the direct impacts of the pandemic and the effects on regional credit conditions happens swiftly.

The five regions most at risk of default over the next 12 months are:

It is encouraging that Coolangatta on the Cold Coast has dropped off this list, yet Gold Coast – North is the third most likely jurisdiction in the nation to have businesses default over the next 12 months. The opening up of the Queensland border and easing of restrictions will hopefully provide a vital boost in tourism and visiting family numbers.

It is concerning that Western Sydney still dominates the list that nobody wants to be on. Bankstown (the area adjacent to Canterbury) tops the rankings in January 2022. These Western Sydney suburbs have weathered the storm of Delta-related lockdowns, only to have to confront the Omicron variant. Many working-age people in these areas, Merrylands – Guilford included, can’t work from home. These regions will need to display significant signs of improvement in approaching months if NSW is to play its usual role of lifting Australia in and out of economic downturns and recessions.

Probability of default by industry

The industries with the highest probability of default over the next 12 months are:

It isn’t surprising that Accommodation and Food Services tops the list. It’s been a topsy-turvey ride for one of Australia’s largest employing sectors, yet Omicron crunched any prospect of a seasonal recovery. Watch that space.

Arts and Recreation Services, together with Education and Training appear to have now firmly dropped off this unwelcome list. These industries have been replaced by Information, Media and Telecommunications and Financial and Insurance Services. Some in these industries will likely not survive a more turbulent summer season than budgeted for. Those with a strong COVID-influenced business plan should thrive, a point CreditorWatch has made before.

The industries with the lowest probability of default over the next 12 months are:

These results reflect the dynamics of economic conditions in Australia.

Healthcare and Social Assistance is dominated by federal and state/territory funding and, sadly, by COVID outcomes. The mining industry is benefiting from strong commodity prices and appears to be still in good shape. The story for agriculture is far from universal – extensive flooding in key regions is a good thing for some, a devastating outcome for others. Overall, though, the industry is in relatively good shape. 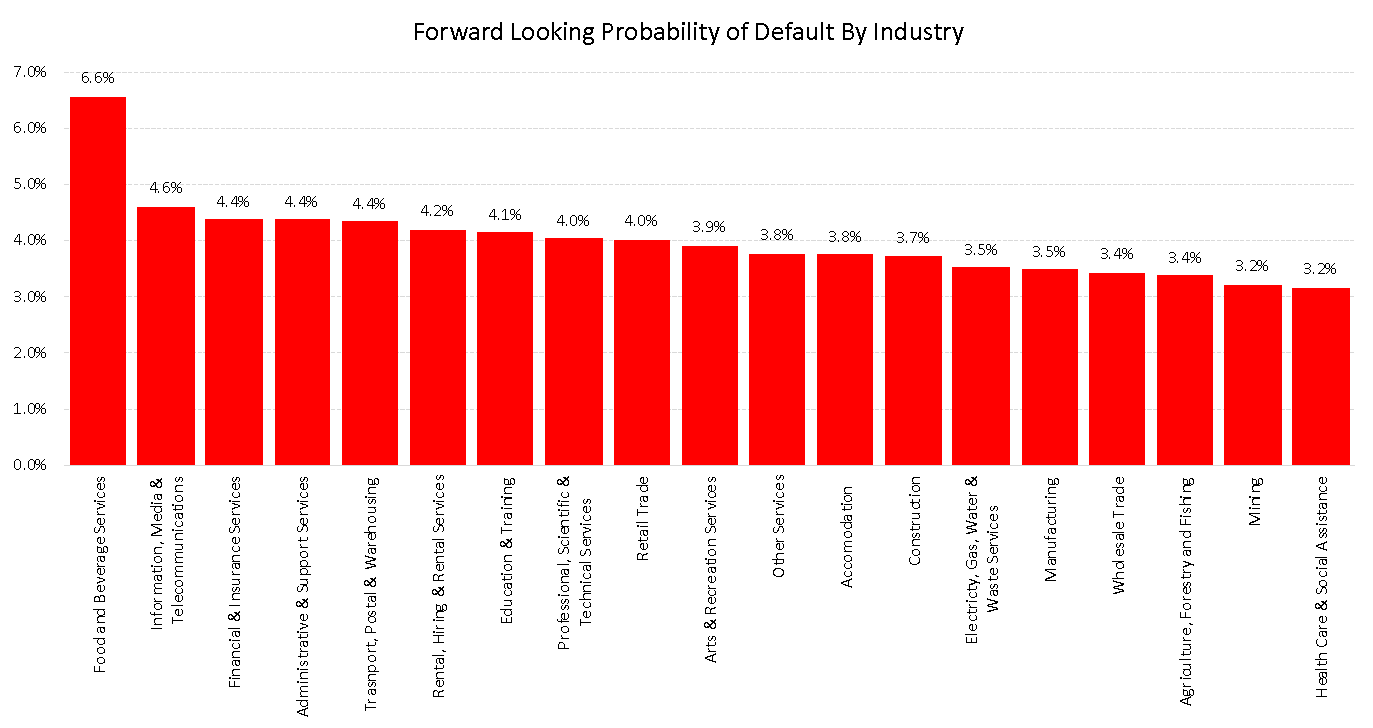 The industries with the highest percentage of businesses in arrears are:

The construction industry has been particularly hard hit by the pandemic. The industry has some unique payment structures which are contributing to a high rate of arrears. If the industry can work through its supply chain disruptions and blowouts in the cost of materials such as timber, it will be in good stead.

Accommodation and Food Services was a major loser from Omicron. Things were looking so much better towards the end of last year, but then fell apart. That is why the industry sits at number two on the list. A fundamental uncertainty for the overall economy is how long it takes for this key industry to sustainably improve. 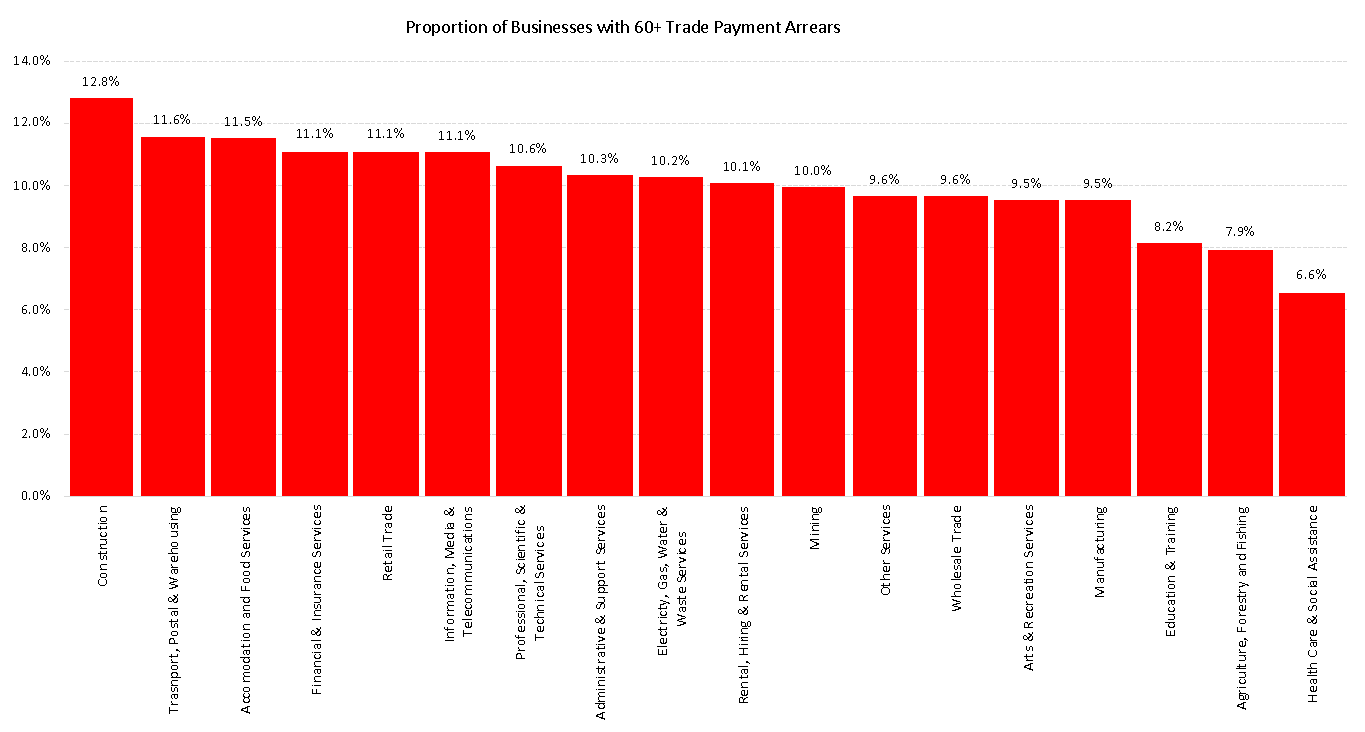 The number of court actions looks to be emerging from its slumber. While in original terms court actions fell in December and January, the levels are still elevated compared to last year overall. Over the 12 months to January this year, court actions were down by 7.0 per cent, but on a quarterly basis they were up 35 per cent. Compared to the three months to January 2021, the number of court cases are up 58 per cent. Signs of normality are returning, with high vaccination rates and Omicron peaking over the second half of January. Court actions may just be a key leading economic indicator.

The number of external administrations dropped sharply in January 2022, but that is a familiar seasonal outcome. Looking through the latest result, administrations increased by nearly 1.0 per cent in the January 2022 ‘quarter’ to be up by 1.4 per cent over the year. These are hardly figures to shoot the lights out but, like court actions, the latest outcome sheds light on the prospect of businesses needing to operate in a more normal credit environment as we proceed through 2022.

The number of credit enquiries is a worry. The number has been trending down since mid-2021. Credit enquiries fell by 12.2 per cent over the three months to January 2022 to be down by 0.3 per cent compared to the equivalent period last year. If we want to see evidence of a short term strong economic bounce-back, this CreditorWatch metric shouldn’t be moving the way it is.

The summer of 2021/22 was so full of promise, but Omicron came along in the first week of December and it all evaporated. There are some signs of economic and credit normalisation in the latest CreditorWatch results – external administrations being one example. Ultimately, though, CreditWatch’s data points to Australia’s economic activity running at a much slower rate than desired. We are in for a bumpy ride, which creates the biggest challenge for SMEs – uncertainty.

ABOUT THE BUSINESS RISK INDEX

The Business Risk Index is a predictive economic indicator to help guide businesses when making future growth plans and inform public policy. It is a new credit rating that ranks more than 300 Australian geographies by relative insolvency risk, providing unique insights into the health of Australian businesses by region.

Each region is ranked from best to worst in terms of the potential for businesses in it to become insolvent. The index can also measure the potential for insolvency risk at a national, state and individual business level.

The index is calibrated by data from approximately 1.1 million ASIC-registered, credit-active businesses. It combines these insights with CreditorWatch’s proprietary data, previously published as the monthly Business Risk Review.

Subscribe to the Business Risk Index to be the first to receive our monthly updates.

Ep 1: The Evolution of Payments